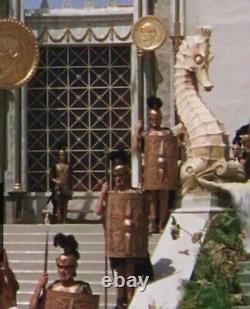 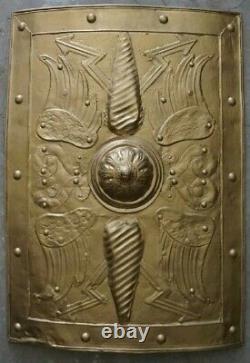 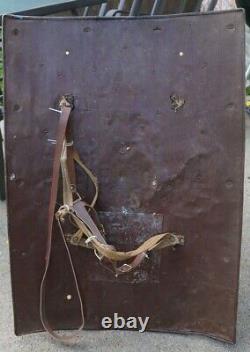 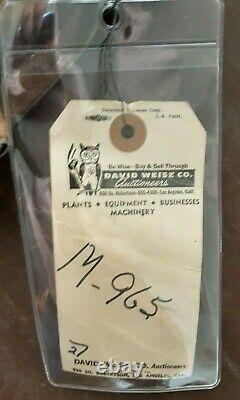 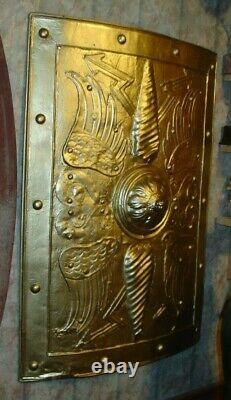 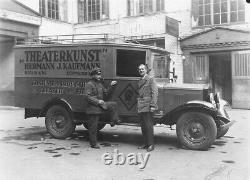 BEN-HUR (1925/1959) Quo Vadis (1951) Authentic Vintage ROMAN SHIELD From the 1970 MGM studios David Weisz SALE. This metal prop shield was designed and manufactured for use in the 1925 Metro Goldwyn Mayer film epic Ben-Hur by actors portraying the Roman soldiers in the film. After that picture (the most expensive motion picture production up to that time) it would go into storage for nearly 30 years in the MGM studio prop department and then be taken out and reused in MGM's Quo Vadis (1951) and the studio's remake of Ben-Hur (1959). With the end of the popularity of the Roman epics of the 1950's, this shield went into storage again at MGM.

WHICH IS INCLUDED WITH THE SALE OF THIS SHIELD. The shield's manufacture was in Germany by the largest theater costume house in Germany then and now... Theaterkunst located in Berlin (see accompanying photo). The company outfitted the Ben-Hur production with costumes and props and would go on to supply outfits and props for such films as Metropolis in 1927 and Von Sternberg's The Blue Angel in 1930 as well as countless more films up to the present day. Theaterkunst also had it's own ironworks which is where this shield was crafted.

The shields were made to the specifications of the MGM studios. The shield is made of a heavy metal and measures 31.5" tall x 22.5" wide. It was preserved several years ago by the application of a thick satin gold paint (it had been painted and repainted several times over decades of it's use in MGM's productions). A metal period replacement center disc/boss was added at the time of restoration. The original discs on these shields had been a rubber material that disintegrated over the many decades since it's manufacture. There is a very old production use ding in the bottom left of the shield which does not significantly detract. There is also a vintage leather strap on the back of the shield that had added at some point by a collector used to hang it from a wall for display. Relatively few of these shields survived to be auctioned in the 1970 sale.

This is a commanding and incontrovertibly authentic artifact that survives as a tribute to the great epics of MGM's film history.... From the era of silent film in the 1920's through the wonderful grandeur of 1950's CinemaScope! The display photo that accompanies this listing of an intense scene between Ramon Novarro as Judah Ben-Hur and Francis X.

Bushman as Messala clearly shows one of these shields held by an actor portraying a Roman soldier. The two screen grabs illustrate the shields being used in the 1950's MGM epics. The item "BEN-HUR (1925/1959) QUO VADIS (1951) Screen Used ROMAN SHIELD 1970 MGM Sale" is in sale since Monday, May 3, 2021. This item is in the category "Entertainment Memorabilia\Movie Memorabilia\Props\Originals". The seller is "colinjrt" and is located in Belleville, Illinois.