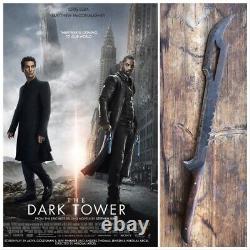 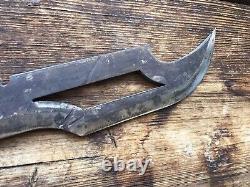 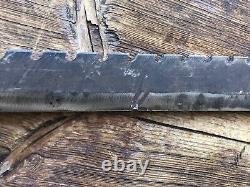 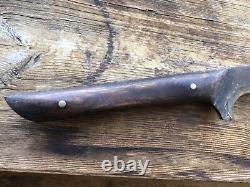 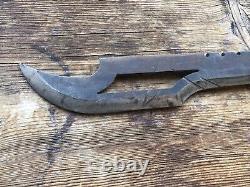 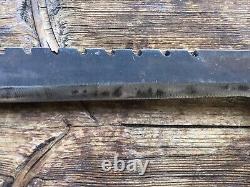 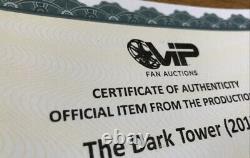 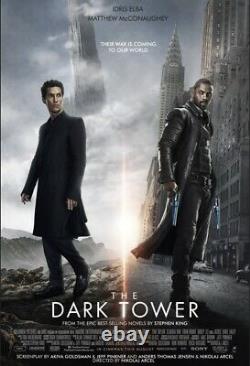 Production used tracker machete from The Dark Tower (2017). Metal blade with wooden handle. There's some heft to it, solid piece. Weighs a little over 2 lbs.

The blade appears to have been intentionally dulled, but it's still fairly sharp, particularly at the point. There is intentional distressing, such as rust and battle scarring on the blade. The item is approximately 26 long, from the end of handle to the tip of blade.

COA from VIP Fan Auctions is included. The mysterious warlock, (Walter Padick as played by Matthew McConaughey), also known as the "Man in Black", seeks to destroy the Dark Tower and bring ruin to the Universe. Meanwhile, a Gunslinger named Roland Deschain (Idris Elba) seeks revenge on him for killing his father and abducting children with psychic powers that he is using to bring down the Dark Tower. The Taheen Trackers are Walter's minions helping him in his mission to destroy the Universe. Roland battles and kills many of the Taheen Trackers in the battle at the local village.

This machete was from Taheen Tracker #10. This item is in the category "Entertainment Memorabilia\Movie Memorabilia\Props\Originals". The seller is "mostly*vinyl" and is located in this country: US. This item can be shipped to United States, Canada, Mexico, Bermuda.