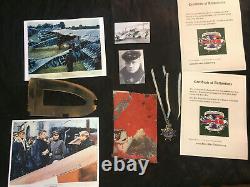 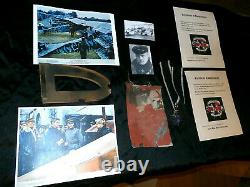 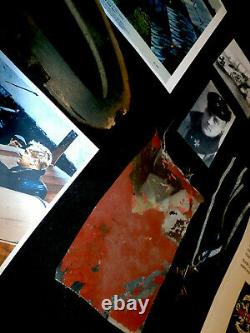 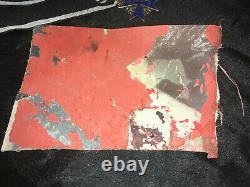 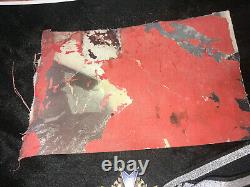 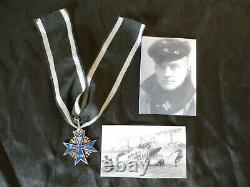 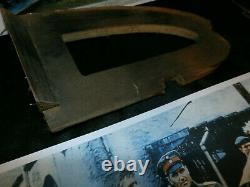 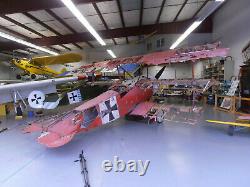 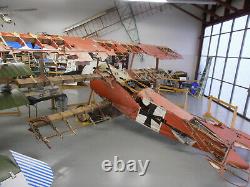 Dr1 Blue Max Triplane leading edge wing rib, wing canvas w/Losenge, prints, and Pour-le-Merite (Blue Max) medal, and two Signed COA. The canvas segment came from the top segment of that same wing, and is showing the final coat of red, as used in the final scenes of the Blue Max, as well as Von Richtofen and Brown, and beneath, the losenge from the first scenes of the Blue Max is peeking through in areas. A person could carefully chip more top coat away, but that is up to you...

Included is a segment of the leading edge of the wing, in one of the strongest parts. This rib is unique to the rest.

The rib section, and the canvas section will come with a certificate of authenticity, signed and numbered. We also have included a reproduction of Two of the Movie Posters from the production of The Blue Max, as well as a reproduction of the Pour-le-Merite medal, and a photo reproduction of the Triplane in it's losenge paint scheme with wing-runners guiding it on launching. This is perfect for a shadowbox display. A print of Von Richtofen seemed fitting to include as well.

In the mid 1960's 20th Century FOX and MGM were competitively interested in producing WWI aviator films, and the Blue Max was a first, in that it flew replica aircraft in WWI settings, all filmed in real flight in Ireland. 1 Triplane was an airframe type that no longer existed, since the only remaining survivor was destroyed in a bombing raid during WWII, when a 250 Lb pound bomb destroyed the area of the museum where it as housed in Germany.

In order of this film to be made, Exact replicas had to be built to flight standards, able to perform aerobatic maneuvers safely. In came the Bitz Brothers and Bitz Flugzenbau, using original Fokker Drawings- they recreated this aircraft flown in the film. In an effort to cover the expense of the restoration, we will be offering a limited amount of these items to be assembled for your collections. While we are not at all claiming that this aircraft is a real genuine WWI flown-and-fought aircraft; - none exist in the world, short of the gathering of bits and pieces that comprise the wreck of Richtofen in Sir Peter Jackson's impressive collection in NZ. This is Bitz Built Fokker Dr.

1 triplane, serial numbered 1. There never were any that preceded it, short of the entire WWI original production, which was destroyed. Incidentally, it is known that Peter Jackson was inspired to make film special effects after seeing this movie, as it also spoke to his endearment for WWI Veterans, and the Richtofen story as well. This item is in the category "Entertainment Memorabilia\Movie Memorabilia\Props\Originals".

The seller is "battlefind" and is located in this country: US. This item can be shipped to United States.