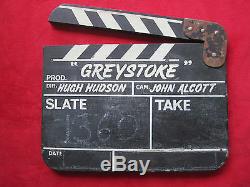 Original Clapperboard Used By the Film Crew of the Motion Picture - Greystoke: The Legend of Tarzan, Lord of the Apes - Based on the Novel Tarzan of the Apes by Edgar Rice Burroughs. An original clapperboard used in the creation of the well-received take on Tarzan by the accomplished screenwriter Robert Towne. A clapperboard is a pair of hinged boards clapped together at the beginning of a film shot in order to aid sound synchronization and at the same time record the shot number and the number of individual takes of a scene.

The board lists the production name, the directors name Hugh Hudson, the director of photographys name John Alcott, the slate number, the take number and the date of shooting. 10 inches wide by 8 inches tall. This piece came from the collection of Nigel Seal, a motion picture camera operator. In the finished film, Christopher Lambert plays Tarzan, Andie MacDowell as Jane; with Sir Ralph Richardson, Ian Holm, James Fox, Cheryl Campbell, and Ian Charleson. The item "EDGAR RICE BURROUGHS ORIGINAL CLAPPERBOARD FOR GREYSTOKE- THE 1984 TARZAN FILM" is in sale since Sunday, May 14, 2017.

This item is in the category "Entertainment Memorabilia\Movie Memorabilia\Props\Originals". The seller is "catstarbuck" and is located in Santa Barbara, California.