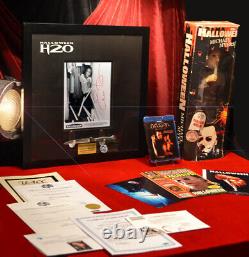 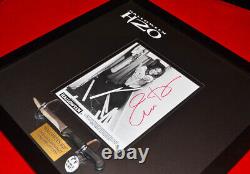 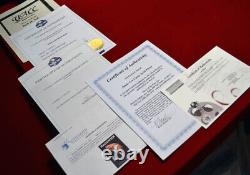 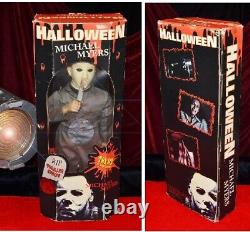 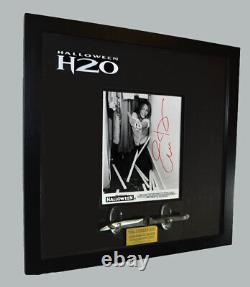 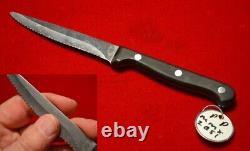 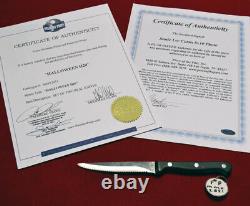 "H20 HALLOWEEN" Screen-Used Prop KNIFE +. Signed Autograph Photos by JAMIE LEE CURTIS, JOHN CARPENTER, TONY TIMPONE & TYLER MANE. +1978 "Michael Myers" Talking Action Figure MIB & More!! Since so many customers have asked, I've agreed to sell this PROP from my personal collection so someone else can enjoy it like I have!

4 CERTIFICATES of AUTHENTICITY from PREMIERE PROPS, ICONOGRAPHS, AUTOGRAPH WORLD LLC & PIECE OF THE PAST AUTOGRAPHS, all guaranteed genuine for life by D. Film Director and UACC Registered Dealer #228. As a TV & Movie DIRECTOR and a lifetime member of the Director's Guild of America, D. Sell is offering some rare props & collectibles from his personal collection from some great television & motion pictures, including "STAR WARS, " "RESIDENT EVIL, " APOLLO 13, " "STAR TREK, " "AMERICAN PIE, " "DIRTY DANCING, " "E. ", "WARM BODIES, " "CASINO ROYALE, " "bruno, " "GONE WITH THE WIND, " "HANNIBAL, " "BATMAN, " "HOOK, " "IT'S A WONDERFUL LIFE, " "HUNT FOR RED OCTOBER, " "SUPERMAN, " "GHOST, " "NATIONAL TREASURE, " "SKYFALL, " "SPIDER-MAN" & "PIRATES of the CARIBBEAN + dozens of other Films & Television shows, many destined to become Classics that will live on for millions of viewers for years to come.

The KNIFE is in Screen-used condition... It's obviously screen-used from being used on the set of the movie! This actual real SCREEN-USED PROP KNIFE we obtained from world renowned PREMIERE PROPS, who acquired all the Props & Costumes from "H20" when they finished filming in Hollywood... This PROP KNIFE was used in the scene when Jamie Lee Curtis is fighting off her brother, Michael Myers, in the kitchen... She pulls out a drawer and the knives fall to the floor...

She picks them up and throws these knifes at Michael trying to kill him! The PROP KNIFE is sitting in the display on the glass of the frame... And, it can be removed if you like! This unique One of a Kind "HALLOWEEN" Autograph & Screen-Used PROP KNIFE comes with this framed autograph of the star, JAMIE LEE CURIS..

This screen-used KNIFE measures approximately 8 1/2 Long. The Screen-Used Prop KNIFE easily lifts off the display if you want to handle it... The Display Stand measures approximately 20 x 20. Everything in this RARE COLLECTION is ready to display in your Home, Museum, Office or Media Room! Of course, you receive a copy of the original COA (Certificate of Authenticity) from Premiere Props that is also signed by DGA Film Director Jack M.

Next, you get this Framed AUTOGRAPH of the star of all the early "HALLOWEEN" motion pictures, Actress JAMIE LEE CURTIS.. She signed in Red Marker on the side of the studio picture... Of course, we fans know "LAURIE STRODE" was the name of the character she has played in the Halloween movies since the first film in 1978... The JAMIE LEE CURTIS Autographed Photo comes with the original COA from PIECE OF THE PAST AUTOGRAPHS...

The Screen-Used PROP KNIFE also comes with a copy of the original COA from world renowned PREMIERE PROPS.. This COLLECTION also includes these 3 genuine Autographs! It includes this 8x10 color photo signed in blue marker by TYLER MANE and comes with original COA (Certificate of Authenticity) from world renowned ICONOGRAPHS.. This autographed FANGORA Magazine #147 (1995) is signed on the cover by Editor TONY TIMPONE with a COA from Premiere Props.. Finally, you recive this original Rare AUTOGRAPH of the man who started it all...

John was the Creator and DIRECTOR of the first "HALLOWEEN" films... He signed in Black Marker on this 8x10 Color studio PHOTO of the Poster. It includes the COA from WORLD AUTOGRAPH LLC.

I would be remiss without a tribute to my friend, DEBRA HILL. She was the original co-writer and producer on "HALLOWEEN" film with director John Carpenter.

Sadly, Debra died of cancer in 2005. She had so much more life to live. When she was honored by Women in Film in 2003, Ms. Hill said: I hope some day there won't be a need for Women in Film. That it will be People in Film.

Debra, you were a joy! You may be gone Debra, but you'll never be forgotten. Sell is a Registered Dealer with the U. We are proud that some of our memorabilia on display in the SMITHSONIAN, Washington, D. Btbandabbermake3s PRAISE: Fantastic items, 30 Star Movie Maker! Heimdell51 "PRAISE: "Great guy; very prompt & efficient service & exc. Packaging; got a free bonus too!

Belfast PRAISE: Wonderful Ebayer & with genuine COA's too! It is the most professional-quality work I've ever seen, absolutely worth every penny. I can't thank you enough for helping me to realize my dream of being able to hold in my hand something that was actually a part of this movie. I even cried a little when I touched the prop for the first time. Thank you from the bottom of my heart. I hope to do business with you again some day!

Everyone that sees it says the same thing, Oh My God. I will treasure it always. Here are a couple of pictures taken in our master suite.

This entrance is to our 2 level bathroom. It is drop dead gorgeous. We also have a booking for the whole weekend with a couple from Texas, so I will enjoy showing it off!

Thanks again Jack, and lets keep in touch. AND, peggie701 wrote us this nice letter. JACK, GOT YOUR PACKAGE TODAY! I WAS VERY IMPRESSED AT THE WAY YOU PUT ALL THE PROPS TOGETHER. I PUT YOU IN ONE OF MY FAVORITES!

AND, THANKS TO THE OTHER 10,000 GREAT EBAYER WE'VE HAD THE HONOR OF WORKING WITH FOR THE PAST 20 YEARS... WE LOOK FORWARD TO MEETING MANY MORE GREAT EBAYERS IN THE FUTURE FROM ALL OVER THE WORLD! Halloween H20: 20 Years Later is a 1998 American slasher horror film and seventh installment in the Halloween film series. It was directed by Steve Miner and starred Jamie Lee Curtis, LL Cool J, Josh Hartnett, and Michelle Williams.

The film was released on August 5, 1998, to mark the 20th anniversary of the original Halloween (1978). The story was developed and created by Robert Zappia. The screenplay was written by Robert Zappia and Matt Greenberg.

It is a direct sequel to John Carpenter's Halloween and Halloween II and retcons the events that transpired in the fourth, fifth, and sixth installments, rendering them as non-canon in this film. Set twenty years after the events of the first two movies, H20 centers on a post-traumatic Laurie Strode living in fear of her murderous brother, Michael Myers, who attempted to kill her all those years ago. When Michael eventually appears, Laurie must face evil one last time, while the life of her teenage son hangs in the balance. The film also features many nods and homages to the original film as well as Alfred Hitchcock's Psycho (1960) and Scream (1996), two of the most critically acclaimed slasher films in history with an influential connection to Carpenter's 1978 film; Psycho inspired the original Halloween and Scream was inspired by the original Halloween. In addition, Janet Leigh, Jamie Lee Curtis's real life mother, who portrayed Marion Crane in Psycho appears in the film as Norma Watson. The film received mixed reviews from critics, praising the script, direction of Steve Miner and the performances of Jamie Lee Curtis, but received criticism for certain plot points and its running time. 20 Year's After Michael Myer's Massacre in Haddonfield. Laurie Strode faked her own death and traveled to California and took on the Identity Keri Tate.

Michael finds out of Laurie's new Identity and travels to California to kill his Sister, Laurie must now take on her Brother with her Son's Life at Risk. Jamie Lee Haden-Guest, Baroness Haden-Guest (Curtis; born November 22, 1958) is an American actress, producer, director, author, and activist.

She made her film debut in 1978, starring as Laurie Strode in John Carpenter's Halloween (1978). The film established her as a "scream queen", and she subsequently starred in various horror movies throughout the early 1980s, including The Fog (1980), Prom Night (1980) and Terror Train (1980). She reprised the role of Laurie in four sequels: Halloween II (1981), Halloween H20 (1998), Halloween: Resurrection (2002) and Halloween (2018). Curtis has compiled a body of film work that spans many genres, including the cult comedies Trading Places (1983), for which she received a BAFTA for Best Supporting Actress, and A Fish Called Wanda (1988), for which she earned a BAFTA nomination for Best Actress. She won a Golden Globe, an American Comedy Award and a Saturn Award for playing the role of Helen Tasker in James Cameron's True Lies (1994). Curtis' other films include Blue Steel (1990), My Girl (1991), Forever Young (1992), The Tailor of Panama (2001), and Freaky Friday (2003). She earned an Emmy Award nomination for her work in the television film Nicholas' Gift (1998). Curtis is a daughter of Janet Leigh and Tony Curtis. She is married to Christopher Guest, with whom she has two adopted children. She is also a frequent blogger for The Huffington Post.

Curtis received a star on the Hollywood Walk of Fame in 1998. The original "H2O" Collection includes 4 original autographs, an original MICHAEL MYERS Action Figure (MIB) & the RARE Screen-Used H20 KNIFE... These have been stored in acid free cases in a smoke free & pet free environment since being acquired. Our pictures are included as part of our ad description.

If this autograph is declared not to be authentic, we may ask the purchaser to supply the full written opinion of one competent authority acceptable to us. This Great HALLOWEEN H20 Collection includes a Genuine Original Screen-Used PROP KNIFE.. It is displayed on the glass of a new black FRAME with the original JAMIE LEE CURTIS Autograph with LOGO & an engraved Plaque, 3 more Autographed 8x10 Photos & Magazine signed by Director/Creator JOHN CARPENTER, TONY TIMPONE - editor of FANGORA MAGAZINE & one of the actors who played MICHAEL MYERS, (the "shape") TAYLOR MANE... Of course, you also get 4 CERTIFICATES of AUTHENTICITY from PREMIERE PROPS, PIECE OF THE PAST AUTOGRAPHS, ICONOGRAPHS & AUTOGRAPH WORLD LLC, all guaranteed genuine for life by D.

Movie & Television Props & Autographs could make for a good investment as well! Check out our other auctions for more great movie & television shows PROPS, AUTOGRAPHS & COSTUMES! Imagine giving this great "HALLOWEEN H20" motion picture collection to the horror fan in your life or just keeping it for yourself! A GREAT COLLECTION from the classic HALLOWEEN motion pictures, originally created by Director JOHN CARPENTER & Producer DEBRA HILL. VERY RARE & VALUABLE ONE OF A KIND PROP & AUTOGRAPH COLLECTION!!

This would look great displayed in your Home, Media Room or Office! This item is in the category "Entertainment Memorabilia\Movie Memorabilia\Props\Originals". The seller is "jackmsell" and is located in this country: US. This item can be shipped worldwide.