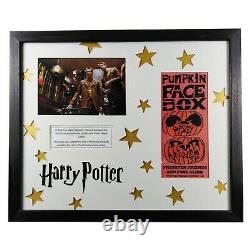 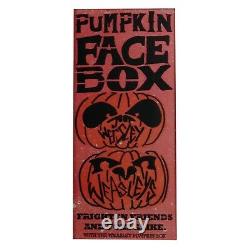 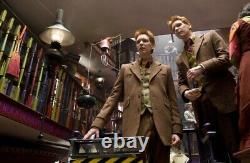 An original production made Weasley's Wizard Wheezes Box Label created for the 2009 classic film Harry Potter and the Half-Blood Prince. This label was created for one of the many products available for sale in the Weasley's shop scene. The label comes beautifully presented in a custom-built frame, featuring the classic movie title. Overall frame size 17in x 14in.

It remains in a very good production used condition. Harry Potter and the Half-Blood Prince is a 2009 fantasy film directed by David Yates and distributed by Warner Bros.

The film, which is the sixth instalment in the Harry Potter film series, and was produced by David Heyman and David Barron. The story follows Harry Potter's sixth year at Hogwarts as he receives a mysterious textbook, falls in love, and attempts to retrieve a memory that holds the key to Lord Voldemort's downfall. Harry Potter and the Half-Blood Prince was. Released theatrically worldwide on 15 July. The film was a major commercial success, breaking the record for the biggest single-day worldwide gross. And 2009's second-highest-grossing film behind. It is the fifth-highest-grossing film in the franchise. The item "Harry Potter and the Half-Blood Prince (2009) Production Made Weasleys Box Label" is in sale since Friday, November 29, 2019. This item is in the category "DVDs, Films & TV\Film Memorabilia\Props\Original". The seller is "studiopropsuk" and is located in Camborne. This item can be shipped worldwide.