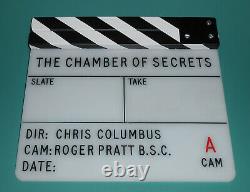 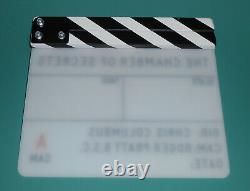 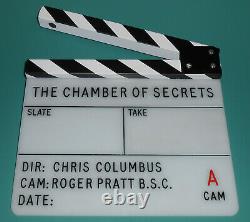 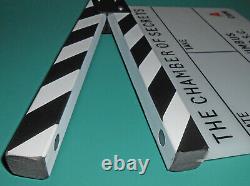 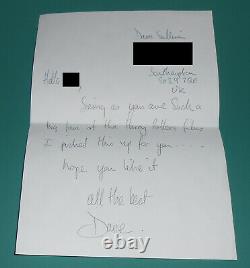 2002 Harry Potter And The Chamber Of Secrets Clapperboard Slate Used In The Production Of The Film Directed By Chris Columbus Cinematographer Roger Pratt (British Society Of Cinematographers) Camera A This is the actual clapper board slate used on the film! Comes with letter from Dave Sullivan who worked on the special effects of this film (see pictures) A must have for any Harry Potter fan!

Harry Potter and the Chamber of Secrets is a 2002 fantasy film directed by Chris Columbus and distributed by Warner Bros. Rowling's 1998 novel of the same name.

Produced by David Heyman and written by Steve Kloves, it is the sequel to Harry Potter and the Philosopher's Stone (2001) and the second instalment in the Harry Potter film series. The film stars Daniel Radcliffe as Harry Potter, with Rupert Grint as Ron Weasley, and Emma Watson as Hermione Granger. Its story follows Harry Potter's second year at Hogwarts School of Witchcraft and Wizardry as the Heir of Salazar Slytherin opens the Chamber of Secrets, unleashing a monster that petrifies the school's denizens. It was the last film to feature Richard Harris as Professor Albus Dumbledore, due to his death that same year.

Principal photography began in November 2001, only three days after the release of the first film. It was shot at Leavesden Film Studios and historic buildings around the United Kingdom, as well as on the Isle of Man.

Filming concluded in July 2002. Chamber of Secrets was released in theatres in the United Kingdom and the United States on 15 November 2002.

It was nominated for many awards, including the BAFTA Award for Best Production Design, Best Sound, and Best Special Visual Effects. It was followed by Harry Potter and the Prisoner of Azkaban in 2004.

The item "Harry Potter Chamber Of Secrets Movie Clapperboard Slate Used Chris Columbus" is in sale since Saturday, February 20, 2021. This item is in the category "Entertainment Memorabilia\Movie Memorabilia\Props\Originals".