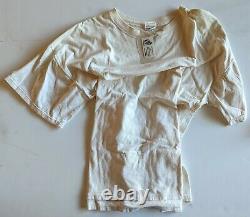 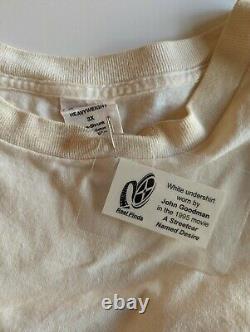 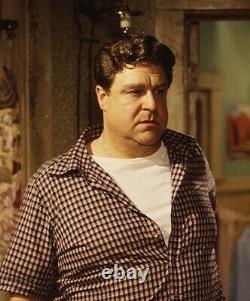 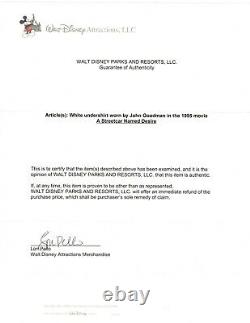 This is for an original T Shirt which was worn by John Goodman in the 1995 made for television drama A Streetcar Named Desire. The film was nominated for four Emmy Awards, including John Goodman for Outstanding Supporting Actor in a Mini Series or Special. John played Harold "Mitch" Mitchell, a suitor of Blanch DuBois (Hope Lange, who won a Best Actress Golden Globe Award for her performance in the film). The shirt is an FL Robinson Heavyweight 3X T which has yellowed a bit by use and sweat.

Pinned to the shirt is a plastic laminate with a card inside which reads "White Undershirt worn by John Goodman in the 1995 movie A Streetcar Named Desire" along with a Reel Finds logo. Also included is a COA from Walt Disney Parks and Resorts LLC which certified it was examined and found to be the authentic shirt worn by John Goodman in the movie. A cool item that would look nice framed with a phot of John wearing it along with the COA from Disney and the tag pinned to the shirt. A must have for any prop or movie merchandise collector.

Its not a bowling shirt from the Big Lebowski, but its still a cool item from a legendary American actor who has done everything from TV to movies to Broadway and everything in between. This item is in the category "Entertainment Memorabilia\Movie Memorabilia\Props\Originals".