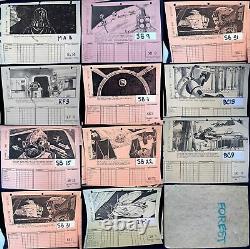 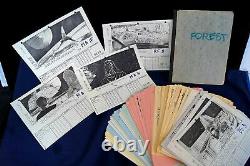 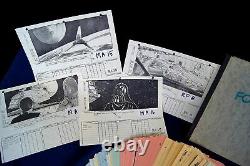 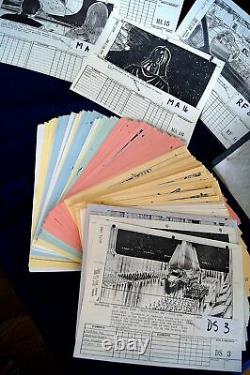 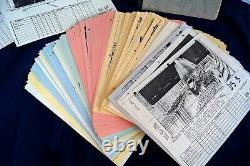 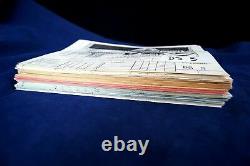 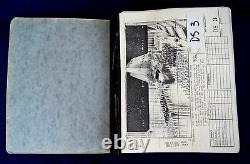 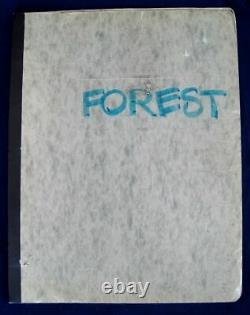 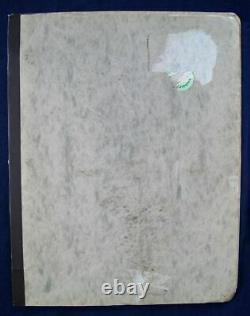 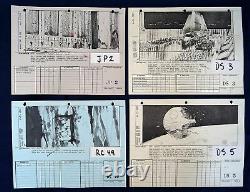 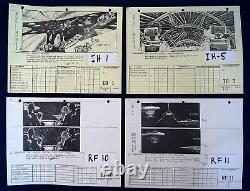 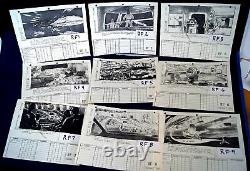 These are guaranteed to be authentic original pieces of Star Wars history. 273 boards of 273 types are housed in a green binder, and'Forest' written on the front cover. Almost all scenes depicted space battle scenes in Endor and battles in the'Forest'. The size of each storyboard is approximately 8.5 x 11.0 inches. This set is a my last collectable of the Star Wars storyboards.

I got this amazing piece from a US movie prop collector who was obtained from the ILM special effects staff in 1999, 22 years ago. There are a huge number of real storyboards here, 273 sheets. It depicted the main characters and many vehicles that appear in Star Wars. Darth Vader, C-3PO & R2-D2, Luke Skywalker, Han Solo, Princess Leia, Chewbacca, Millennium Falcon, Death Star, X-wing, Tie Fighter, Star Destroyer, etc. All of them are very impressive scenes and are familiar to everyone.

Also note that it contains many consecutive scenes. I have attached many images of nearly 100. You can check the continuous scene in the image. The storyboard were hand drawn by artists at ILM and had to be approved by George Lucas before they were to be distributed. When set was completed and approved, in house sets were ordered and bound into green binders.

These binders were then distributed to certain people working on the film. One of the first things you will notice is that each scene is printed on a different color paper. This was done to keep track of then more easily. The next thing you may notice is that these are white labels with the scene numbers written on them and attached to most of the pages. I believe that this particular set was a flagship or master set for several reasons which I will list.

First: There are tiny pinholes on almost sheets. This indicates that these pages were posted up on a wall sometime during the production phase so that large groups of crew working on the film could follow the shooting as is occurred.

Second: The large white scene number labels were possibly attached so that they could be easily viewed by many crews. Third: This is the most important feature in this set.

The ILM shot completion stamps. As the shots were completed a stamp was applied to each page in red or black ink. In most cases, the stamped pages were stamped twice.

Once over the artwork itself and is a truly rare and one of a kind item used during the actual production of a Star Wars movie in 1982. As you may see, this set is complete. There are 3 binder holes on the top of each sheet. Also, the sheet with the white number label has some tiny pinholes because they were posted up on a wall.

Some sheets have handwritten notes by the ILM crews. This is an unmistakable genuine movie prop, NEVER a copy or bootleg.

Obtaining such a large number of storyboards will be hopeless in the future and will be a valuable asset for you. This is a great collectable and can no longer be obtained already! From My Own Precious Collections These Star Wars collectables have been steadily collected by me since 1977 when there was no internet yet. Most of these are now hard-to-find or expensive. Some of the Star Wars posters I have collected are also listed in the Star Wars poster book. You probably won't get a second chance to get it in the future. I NEVER sell reproductions, copies or bootlegs ever! Note: Can't explain the details in words so please check the images.

Only to your home or office. Please be sure to receive the delivered item. Extension without contact isn't accept. Also, please don't ask me about other stocks.

Thank you for your cooperation! FREE scheduling, supersized images and templates. Make your listings stand out with FREE Vendio custom templates! Over 100,000,000 served.