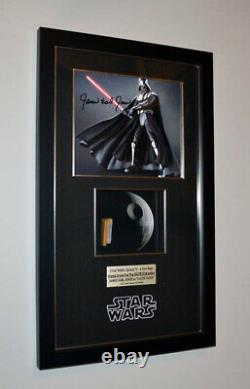 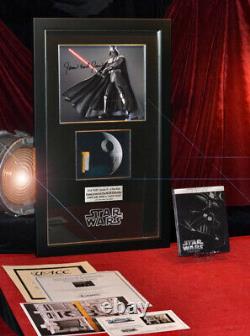 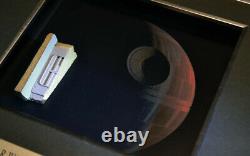 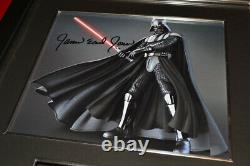 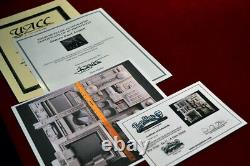 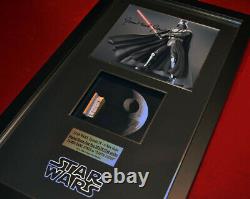 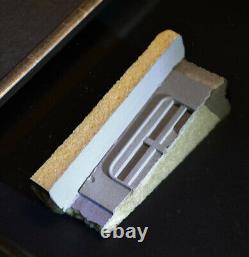 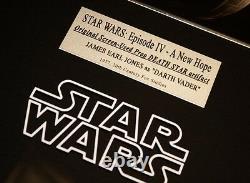 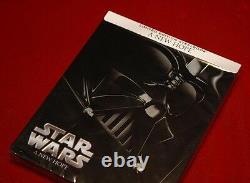 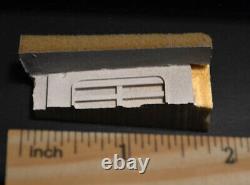 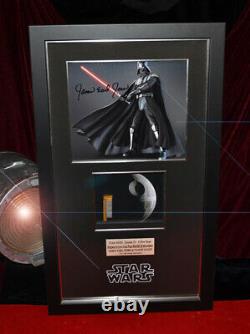 Check out our NEW Star Wars PROPS & COSTUMES from "The Rise of Skywalker" filmed at Pinewood Studios - a real "One of a Kind" Opportunity! Just look in "STAR WARS: The Rise of Skywalker, " the DEATH STAR appears in the new film! Disney has revealed that the Death Star wreckage now resides on an ocean moon named Kef Bir. A Large STAR WARS IV "Death Star" Prop + OSCAR winning JAMES EARL JONES Autograph!

A LARGE Actual SCREEN-USED "Pipes" Prop Piece from "The DEATH STAR". A Great Classic Motion Picture... IF YOU EVER THOUGHT OF OWNING SUCH A RARE PIECE OF "STAR WARS" MEMORABILIA, NOW IS THE TIME!!! And, this is a nice unusal PIECE!

These are almost gone and very hard to find in the marketplace! A Great Gift or Investment! A LARGE Original Prop piece of the actual DEATH STAR from the first GEORGE LUCAS film, "STAR WARS IV: A New Hope" accompanied with a copy of the original (COA) Certificate of Authenticity from The PROP STORE of LONDON...

Acquired from Richard Edlund, 6 time Oscar Winner & ILM Special Effects Cameraman. A DRAMATIC Movie DISPLAY that includes the LARGE screen-used PROP mounted inside a custom matted shadowbox with Engraved display PLAQUE. An Original Signed color photograph of JAMES EARL JONES, the famous actor who does the voice of DARTH VADER in the Star Wars films. A new BLU RAY DVD sealed special Steelbook Edition of "STAR WARS IV" so you can see your prop on the screen..

I've been a D. Director of film & television for over 30 years & I've certainly loved these movies as much as any fan! As a TV & Movie DIRECTOR and a lifetime member of the Director's Guild of America, D. ", "AEON FLUX, " "WARM BODIES, " "CASINO ROYALE, " "IRON MAN, " "RESIDENT EVIL, " "MIRROR MIRROR, " "THUNDERBALL, " "GONE WITH THE WIND, " "CHRONICLES OF RIDDICK, " "HANNIBAL, " "BATMAN, " "WIZARD OF OZ, " "IT'S A WONDERFUL LIFE, " "SUPERMAN, "THUNDERBALL, " "RESIDENT EVIL, " "NATIONAL TREASURE, " "SKYFALL, " "MEN IN BLACK, " "SPIDER-MAN" & "PIRATES of the CARIBBEAN" + dozens of other Films & Television shows, many destined to become Classics that will live on for millions of viewers for years to come. This very RARE PROP piece of the "DEATH STAR" Filming Model Section Cut Piece that was used on-screen in the first famous STAR WARS motion picture in the shape of a "VENT"... And it was shot on the set in the studio's parking lot! STAR WARS IV: A New Hope.

This is the LARGE actual HIGHLY DETAILED RARE Prop "VENT" piece of the Death Star model used on-screen in the 1977 sci-fi classic, Star Wars: A New Hope. These prop pieces were created by ILM model makers for use in creating the large filming miniature of the Death Star surface. After filming the stop motion scenes like this, some of these sections were also sent over to Larry Cuba in the computer graphics department who created the digital imagery as well! This particular Prop Piece can be seen on the original Death Star in Star Wars: A New Hope.

" It measures approximately 2" long. Many of these pieces from the DEATH STAR have tiny chips and burns on them from use in the motion picture from the pyrotechnics. Interlocking abstract pieces were made... These prop pieces being formed using biscuit foam construction and painted and detailed to the high ILM standard.

This piece originally comes from the collection of visual effects guru Richard Edlund. (ILM First camera: miniature and optical effects unit). This prop was acquired directly from the Lucasfilm model makers by The Prop Store of London..

A Very RARE "STAR WARS" Beautiful Display.. The Prop is part of the "DEATH STAR, " one of the most FAMOUS Props in Motion Picture history! And you can own a piece of film history, keep it as an investment and enjoy it for many years to come!

Again, this is the actual prop piece you will receive. Also included is this VALUABLE 8x10 color AUTOGRAPHED photo of JAMES EARL JONES as DARTH VADER from the "Star Wars" movie... JAMES EARL JONES did the famous voice of Darth Vader and is a winner of the Academy Awards, EMMY, Golden Globes & TONY Awards.. JAMES EARL JONES signed this great photo in Black Marker.

At the bottom of the Frame is this engraved PLAQUE & LOGO that reads. The large Black shadowbox FRAME with (non breakable) ACRYLITE GLASS measures approximately 25" x 14" x 1 with the black matte & silver fillets.. It is professionally framed by Michaels Arts under acrylite UV Glass and wired to hang..

This "One of a Kind" DISPLAY is just ready to display in your Office, Home, Museum or Media Room. The fantastic genuine PROP "Death Star" Screen-Used Prop came directly from the set at Lucasfilm Studios and includes a copy of the original Certificate of Authenticity that guarantees this Screen-Used Prop original and genuine by The Prop Store of London... The Prop cutting was made by D.

SELL and includes his seal and signature on the COA. You also receive a Certificate of Authenticity for the JAMES EARL JONES Autograph from world renowned Todd Mueller Autographs. Both the Prop & Autograph are further guaranteed genuine by UACC Registered Dealer #228 & D. Film & Television Director Jack M. The Prop Store of London have one of the best sites in the world for both Star Wars & James Bond props...

Check them out on the web!!! You also receive this factory sealed "Steelbook" edition of "STAR WARS IV". "STAR WARS IV: A NEW HOPE". Widescreen, NTSC, Region One, Blu Ray & DVD. A GREAT DRAMATIC EXHIBIT from.

Sell is a Registered Dealer with the U. We are proud that some of our memorabilia on display in the SMITHSONIAN, Washington, D.

I WAS VERY IMPRESSED AT THE WAY YOU PUT ALL THE PROPS TOGETHER. I PUT YOU IN ONE OF MY FAVORITES! Hello, I wanted to let you know my order arrived in perfect condition. Oh, I'm so excited to have this (Death Wars) piece.

It is my holy grail item to actually get a piece from the (Star Wars) original movie. I will forever be grateful to you to give me the opportunity to have something very few do. I left you 5 star feedback, and thank you so very much again! AND, THANKS TO THE OTHER 10,000 GREAT EBAYERS WE'VE HAD THE HONOR OF WORKING WITH FOR OVER 20 YEARS... WE LOOK FORWARD TO MEETING MANY MORE GREAT EBAYERS IN THE FUTURE FROM ALL OVER THE WORLD!

RARE "Star Wars" Movie PROP Collection that includes an Original Screen-Used PROP "TUBES" piece of the miniature DEATH STAR built and used for George Lucas' first Star Wars film "STAR WARS: A NEW HOPE, " direct from the Set at Lucasfilms & an 8x10 color Autographed Photo by JAMES EARL JONES, a copy of the original COA from The PROP STORE Of LONDON, a large SHADOWBOX DISPLAY CASE with engraved plaque & original sealed STEELBOOK Blu Ray DVD of "STAR WARS: A NEW HOPE" (NTSC, Region One). Of course, you get the copy of the original CERTIFICATE OF AUTHENTICITY (COA) from the LONDON PROP STORE signed by DGA Film Director Jack M. Sell, who made the cutting of the Death Star PROP that guarantees this screen-used prop genuine... You also receive an 8x10 photo of the larger Death Star piece that shows exactly where your piece (#C) was removed and framed. This professionally made shadowbox Frame with acrylite Glass makes for a very dramatic display, all ready to display in your Home, Office, Museum or Media Room... A GREAT piece of STAR WARS MOTION PICTURE history.... A real "One of a Kind" Find & Conversation Pieces.. Movie & Television Props & Autographs can make for a good investment as well! Check out our other auctions for more great movie & television PROPS, AUTOGRAPHS & COSTUMES! Imagine giving this ULTIMATE great STAR WARS Movie PROP & AUTOGRAPH collection to the Star Wars Fan in your family or just keeping it for yourself for what could be a good investment! A GREAT MOTION PICTURE COLLECTION from a great classic film, STAR WARS IV: A New Hope.

VERY RARE & VALUABLE ONE OF A KIND PROP & AUTOGRAPH!! It's very hard to find the real Props from this great movie... This would look great displayed in your Home, Museum or Office for years to come!

UNFORTUNATELY , it may one of the very last JAMES EARL JONES displays you'll see here! The item "Rare STAR WARS Screen-Used Prop DEATH STAR Signed JAMES EARL JONES, COA DVD UACC" is in sale since Sunday, December 6, 2020. This item is in the category "Entertainment Memorabilia\Movie Memorabilia\Props\Originals". The seller is "jackmsell" and is located in New Port Richey, Florida.