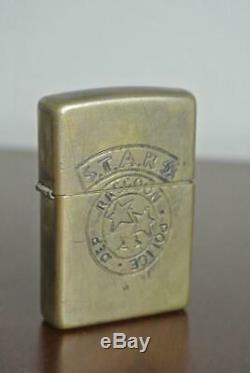 GENUINE & AUTHENTIC, original major motion picture movie prop! Here is your chance to own a part of this. This listing is for a one of a kind, screen used movie prop from the 2016 film, Resident Evil: The Final Chapter. Claire's (Ali Larter) zippo lighter with S. S RACOON POLICE DEPARTMENT engraved on both sides.

This prop has been maliciously detailed (aged/distressed) for the film. This prop includes a Certificate of Authenticity (COA). About the Film: The human race's last hope against apocalyptic obliteration is supersoldier Alice (Milla Jovovich), but she's been stripped of her psychic powers. Alice is soon forced to form alliances and rally survivors in Raccoon City for the climactic battle against the Umbrella Corporation and its ravenous hordes of the undead.

This film is the sixth and final installment in the. Film series, which is loosely based on the Capcom survival horror video game series. The film stars Milla Jovovich, Ali Larter, Shawn Roberts, Ruby Rose, Eoin Macken, William Levy, and Iain Glen.

The seller is "lost$$found" and is located in Brookfield, Wisconsin. This item can be shipped worldwide.