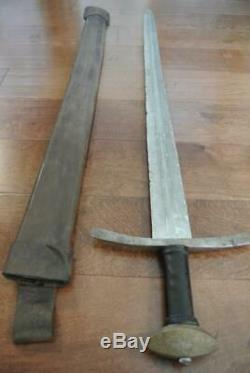 Here is your chance to own a part of this American romantic action adventure movie! This listing is for a one of a kind, movie prop from the 1991 action film. Robin Hood: Prince of Theives. This claymore sword and sheath is made of metal and leather.

The blade and pommel are metal with a leather grip and sheath. The blade is dull and it has been maliciously detailed (aged/distressed) for the film. As, such it is not a real sword.

This sword was made specific to the movie time period by production. The sheath also has a belt attachment. This prop includes a Certificate of Authenticity (COA). Film Plot: Nobleman crusader Robin of Locksley (Kevin Costner) breaks out of a Jerusalem prison with the help of Moorish fellow prisoner Azeem (Morgan Freeman) and travels back home to England. Upon arrival, he discovers his murdered father in the ruins of his family estate, killed by the vicious sheriff of Nottingham (Alan Rickman). Robin and Azeem join forces with outlaws Little John (Nick Brimble) and Will Scarlett (Christian Slater) to save the kingdom from the sheriff's villainy. It enjoyed the second-best opening for a nonsequel, at the time. Get images that make Supersized seem small.

This item is in the category "Entertainment Memorabilia\Movie Memorabilia\Props\Originals". The seller is "lost$$found" and is located in Brookfield, Wisconsin. This item can be shipped worldwide.