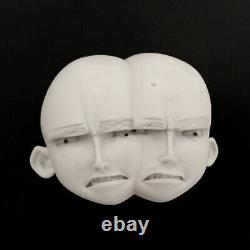 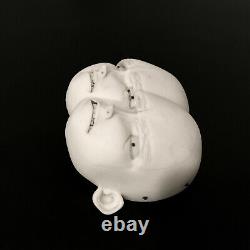 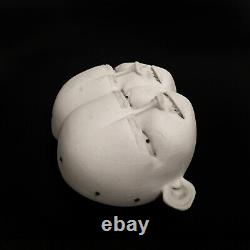 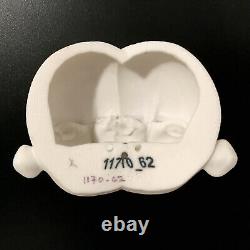 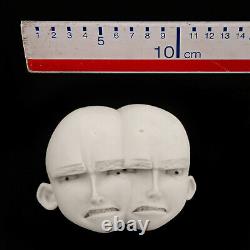 Screen Used Stop Motion Prop from Paranorman - Aggie Prenderghast. Created for the vengeful spirit Agatha, this puppet face has been 3D printed in resin. It was used for the scene where Norman finally meets the ghost, bathed in yellow light with its head rapidly changing form an especially difficult effect to replicate with the films stop-motion animation style.

The two faces are joined at the eye, with the right eye from the left face merging with the left eye from the right face the eyebrow overlaps similarly to help create the illusion of rapid movement. Every character in the film required multiples of each face, head and other components to swap out for individual mouth shapes, expressions and actions. This particular puppet face is one of several made for production. Facial details are well-realised, including expressive teeth, ears and nose elements. The back of the hollow piece has an opening for where it would have been mounted on the rest of the puppet.

A must-have for fans of stop-motion animation. Comes with Certificate of COA.

Behind the scenes Angry Aggie! The item "Screen Used Stop Motion Prop from Paranorman Laika Aggie Prenderghast RARE" is in sale since Monday, October 18, 2021. This item is in the category "Entertainment Memorabilia\Movie Memorabilia\Props\Originals". The seller is "houserdigital" and is located in Ventura, California.