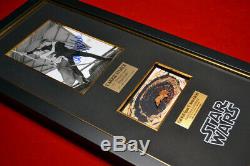 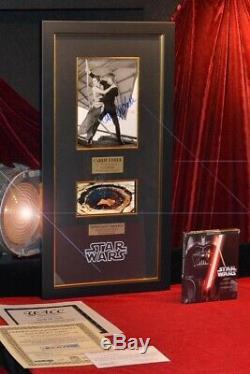 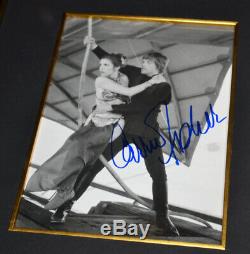 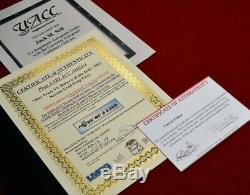 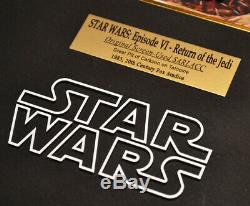 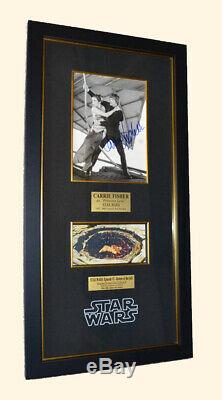 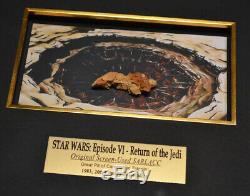 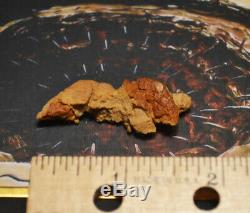 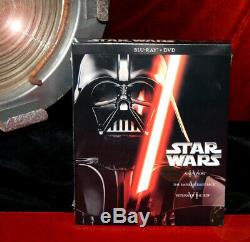 A Great Gift or Investment! A Screen-Used Original Prop piece of the actual "SARLACC" from the "GREAT PIT of CARKOON" on Tatooine from the third GEORGE LUCAS film, "STAR WARS VI: RETURN OF THE JEDI" & Original Certificate of Authenticity...

", "WARM BODIES, " "CASINO ROYALE, " "bruno, " "GONE WITH THE WIND, " "CHRONICLES OF RIDDICK, " "HANNIBAL, " "BATMAN, " "IT'S A WONDERFUL LIFE, " "SUPERMAN, " "GHOST, " "NATIONAL TREASURE, " "SKYFALL, " "SPIDER-MAN" & "PIRATES of the CARIBBEAN + dozens of other Films & Television shows, many destined to become Classics that will live on for millions of viewers for years to come. This very RARE PROP piece of the "SARLACC" was Filmed on location in YUMA, ARIZONA... Special effects artists Stuart Freeborn, Phil Tippett, and the crew of Industrial Light & Magic (ILM) constructed a pit in the desert sands of Yuma that contained a gaping mouth and tentacles. At the time, the pit (along with Jabba the Hutt's sail barge) constituted one of the largest motion picture sets ever constructed. The creature seen in Return of the Jedi is very inanimate. A hydraulic system was designed to animate the creature, but the blowing sand clogged the mechanism.

The film crew instead used poles and wires to move the creature's tentacles. Actress Carrie Fisher recalled that many of the crew and stunt men who fell into the creature during filming suffered broken legs and sprained ankles. The one condition of the sale was that the materials were not to be resold as souvenirs! The Prop ARTIFACT in this Display is an actual piece of the Original piece of the SARLACC Great Pit of Carkoon on Tatooine used on-screen in the 1983 sci-fi classic from 20th Century Fox Studios, Star Wars: Return of the Jedi.

This particular prop appears to be made of a foam material that was constructed and painted... This SARLACC from the "GREAT PIT of CARKOON" on Tatooine was created in the head of "Star Wars" Director/Writer GEORGE LUCAS and Special effects artists Stuart Freeborn and his crew built & designed this giant monster, that was used to film the large exterior set. This particular set can be seen in the film, Star Wars: Return of the Jedi.

A Very RARE "STAR WARS" Display. The Prop is part of the "Original piece of the SARLACC Great Pit of Carkoon on TATOOINE, one of the most FAMOUS "JEDI scenes in Motion Picture history! And you can own a piece of this film history, keep it as an investment and enjoy it for many years to come!

This RARE screen-used PROP is also matted with this original genuine AUTOGRAPH of CARRIE FISHER as "PRINCESS LEIA" in a fight right above the PIT OF CARKOON. Carrie signed this great picture in blue permanent marker and yes, it was hard to get this autograph with this pose! The display has this engraved metal plaque attached to the shadow box frame and the "Star Wars" LOGO.. This is just ready to hang and display in your Home, Office, Museum or Media Room.. A great way to display this extremely RARE Screen-used PROP... You also get this Special Edition Brand New Factory Sealed BLU RAY DVD of 3 "STAR WARS" movies! "STAR WARS IV: A NEW HOPE" "STAR WARS V: THE EMPIRE STRIKES BACK" "STAR WARS VI: RETURN OF THE JEDI". The display measures approximately 26" x 13". The actual Prop Artifact measures approximately 2 long.. A great way to display this extremely RARE Screen-used PROP..

This Original PROP & AUTOGRAPH are NOT A COPY... The Artifact came directly from the set in Yuma, Arizona with a CERTIFICATE OF AUTHENTICITY from D.

The AUTOGRAPH comes with an original COA from world renowned autograph dealer PIECE OF THE PAST signed by CEO Kevin Martin and also guaranteed by UACC Registered Dealer #228. A GREAT DRAMATIC EXHIBIT with this RARE COLLECTION! A great STAR WARS Collection..

The original Prop "STAR WARS" SARLACC PROP Artifact & AUTOGRAPH + DVD have been stored in an acid free case in a smoke free, pet free environment since being acquired. Our Pictures are also part of our description.

The Film History of the "SARLACC" on Tatooine. The sarlacc is a fictional creature in George Lucas's science fiction saga Star Wars. It first appeared in the film Star Wars Episode VI: Return of the Jedi (1983) as a multi-tentacled alien beast whose immense, gaping mouth is lined with several rows of sharp teeth.

The sarlacc in the film inhabits the Great Pit of Carkoon, a depression in the sand of the desert planet Tatooine. This creature is one of the largest of several sarlacc scattered across the Star Wars galaxy. The sarlacc is a creature in Star Wars fiction that first appeared in the 1983 film Return of the Jedi. Crime lord Jabba the Hutt attempts to execute Jedi knight Luke Skywalker (Mark Hamill), smuggler Han Solo (Harrison Ford), and the Wookiee Chewbacca (Peter Mayhew) dubbed "victims of the almighty sarlacc" by dropping them into the creature's gaping maw. Luke frees himself and the others with the aid of Lando Calrissian (Billy Dee Williams) and droid R2-D2 (Kenny Baker). A skirmish ensues ending with Jabba's death at the hands of Princess Leia Organa (Carrie Fisher). Check out our other auctions for more TV & Movie Collections that include wardrobes, props & autographs. Sell is a Registered Dealer with the U.

JACK, GOT YOUR PACKAGE TODAY! I WAS VERY IMPRESSED AT THE WAY YOU PUT ALL THE PROPS TOGETHER. I PUT YOU IN ONE OF MY FAVORITES! AND, THANKS TO THE OTHER 10,000 GREAT EBAYERS WE'VE HAD THE HONOR OF WORKING WITH FOR OVER 15 YEARS...

WE LOOK FORWARD TO MEETING MANY MORE GREAT EBAYERS IN THE FUTURE FROM ALL OVER THE WORLD! RARE "Star Wars" Movie PROP Collection that includes an Original Screen-Used PROP Artifact from the Screen-Used Prop Piece of "SARLACC" from the "GREAT PIT of CARKOON" on Tatooine and used for George Lucas 3rd Star Wars film "STAR WARS VI: RETURN OF THE JEDI, " Original AUTOGRAPH by CARRIE FISHER (Princess Leia), 2 original Certificates of Authenticity, a large UV acid-free CUSTOM MADE DISPLAY Frame with acrylite glass and "STAR WARS" Logo with an engraved metal plaque + the original sealed BLU RAY DVD STAR WARS VI: RETURN OF THE JEDI.

Of course, you get the Original CERTIFICATE OF AUTHENTICITY (COA) from UACC Registered Dealer #228 and D. Sell that guarantees this screen-used prop absolutely genuine... You also get the original COA from world renowned autograph dealer PIECE OF THE PAST for the CARRIE FISHER signed photo. A GREAT piece of STAR WARS MOTION PICTURE history....

A real "One of a Kind" Find & Conversation Pieces.. Movie & Television Props & Autographs can make for a good investment as well! Check out our other auctions for more great movie & television PROPS, AUTOGRAPHS & COSTUMES!

Imagine giving this ULTIMATE great STAR WARS movie collection to the Star Wars Fan in your family or just keeping it for yourself for what should be a good investment! WE ALSO OFFER A 3 MONTH LAYAWAY PLAN WHERE YOU CAN MAKE 3 EQUAL MONTHLY PAYMENTS TO US & WE DON'T CHARGE ANY INTEREST.... A GREAT MOTION PICTURE COLLECTION from a great classic film, STAR WARS VI: Return of the Jedi. VERY RARE & VALUABLE ONE OF A KIND PROP & AUTOGRAPH!! This would look great displayed in your Home, Museum or Office for years to come!

Add a map to your own listings. The item "STAR WARS Prop SARLACC Carrie Fisher Signed Autograph COA Blu Ray DVD UACC Frame" is in sale since Monday, April 15, 2019. This item is in the category "Entertainment Memorabilia\Movie Memorabilia\Props\Originals". The seller is "jackmsell" and is located in New Port Richey, Florida. This item can be shipped worldwide.