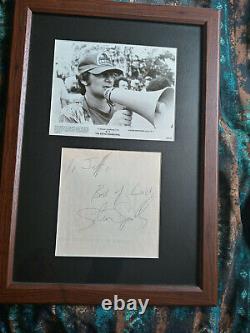 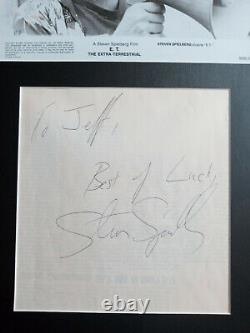 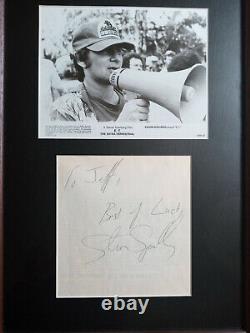 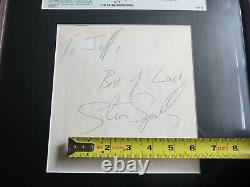 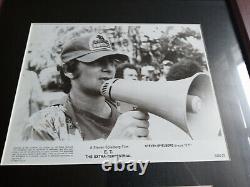 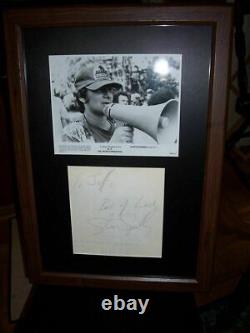 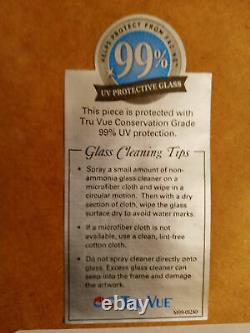 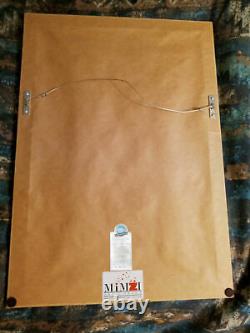 Please check my other auctions for more rare movie memorabilia (Steven Spielberg related items including a Duel poster signed by Dennis Weaver and a Indiana Jones movie poster signed by producer Frank Marshall), George Romero, and John Carpenter items. Simply One of the best quality authentic, non rushed, easy to read, vintage large Steven Spielberg autographs you can find. I will include a hand written letter of authenticity with this framed autograph.

Beautiful autograph display that always draws attention when seen. This is your opportunity to own an authentic signature of the legendary Academy Award winning filmmaker. One professionally framed Steven Spielberg autograph with a original 8x10 press photo from E. The Extra-Terrestrial showing Spielberg with a USC Cinema cap and a bull horn on set.

Beautifully and professionally framed to roughly 16 1/2" x 23" overall frame size with acid free backing inside and UV Tru Vue Conservation Grade 99% UV protection glass. Rare large not rushed signature with rare inscription (which he RARELY ever adds to items today). You can tell how large the autograph is as the 8x10 photo (That is slightly matted smaller in size) is above the autograph for size comparison. Signed To Jeff, Best of Luck, Steven Spielberg. I obtained this in person on the back lot of Universal Studios (more on that in a moment) and then had it professionally framed.

And his name is extremely neatly written (Classic 1980s Spielberg signature unlike many of the sloppy rushed smaller signatures of today). 3 He will rarely the time to sign an autograph to someone (which this one is).

If you don't like that then simply take this framed display to a professional framer to have the matte extended down past "To Jeff" so it covers it up. Your new display matted would simply show "best of luck Steven Spielberg" if you decided to do that.

4 He will rarely take the time to sign with a sentiment like "Best of luck" like this one has. 5 This is vintage unrushed signature of Steven Spielberg from 1987.

Specifically he signed it in front of me on July 14, 1987 on the back lot of Universal studios in front of the Studio Restaurant (which is off limits to the public). Not a sloppy signature at all which you see all too often anymore. Very neatly written large signature. The paper sheet he signed is one I grabbed out of my USC school folder at the moment I met him. It features printing of some movie / filmmaking article on the other side that was handed out from class which is why you see some print bleeding through.

The article print bleed through is not from age at all. It looks the same as it did in 1987. It was the first paper I grabbed in my folder and I had wanted him to sign something for me. As a USC Cinema student during the summer of 1987 I took the USC Universal Film Business Procedures Summer Course. I spent a lot of time on the back lot of Universal Studios where Amblin Entertainment (Steven Spielberg's office) is also located. One day (July 14, 1987) at the end of lunch I was sitting outside in front of the Studio Restaurant on the back lot when I noticed a golf cart pull up near by. Steven Spielberg was the cart driver and he got out of the cart (wearing his then typical baseball cap, hawaiian shirt, and shorts) and walked towards my direction. He responded with a surprised Hello.

He then walked into a nearby office. About ten minutes later he left the office and walked back my way. I approached him and asked him if he would sign the back of this paper. He signed To Jeff Best of Luck, Steven Spielberg. He then was very gracious with his time and chatted for a couple of minutes about me being a USC film student and he wanted to know what I was experiencing on the back lot of Universal as a film student.

I mentioned my class would love to a get tour of Amblin. He didn't hesitate and said no promises but have your instructor call my office and we will see if something can be arranged.

Shook his hand and he left. I then told my USC Cinema instructor William Sabados aka Bill Sabados.

Two weeks or so later, my class was invited to Amblin where we toured the facility and met Frank Marshall and Spielberg's assistant at the time Mark Marshall. We were told Spielberg would NOT have time to meet with us as he was in post production on Empire of the Sun but they screened Indiana Jones outtakes for us in the Amblin screening room. Upon conclusion of the screening, Spielberg unexpectedly walked in, sat down in front of the class and was extremely generous with his time as he took 90-120 minutes with us where we could just ask him questions.

This item is in the category "Collectibles\Autographs\Movies". The seller is "magichouratarea51" and is located in this country: US. This item can be shipped to United States.