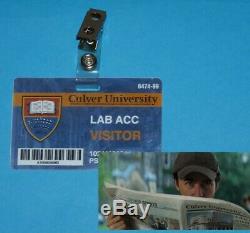 This is a prop laminated ID from the 2008 Hulk film. Would make a nice framed display. I have covered up some details to prevent exact replicas from being made. The Incredible Hulk is a 2008 American superhero film based on the Marvel Comics character the Hulk, produced by Marvel Studios and distributed by Universal Pictures. It is the second film in the Marvel Cinematic Universe (MCU). The film was directed by Louis Leterrier, with a screenplay by Zak Penn. It stars Edward Norton as Bruce Banner, alongside Liv Tyler, Tim Roth, Tim Blake Nelson, Ty Burrell, and William Hurt. In The Incredible Hulk, Bruce Banner becomes the Hulk as an unwitting pawn in a military scheme to reinvigorate the "Super-Soldier" program through gamma radiation. On the run, he attempts to cure himself of the Hulk before he is captured by General Thaddeus Ross, but his worst fears are realized when power-hungry soldier Emil Blonsky becomes a similar, but more bestial creature. After the mixed reception to the 2003 film Hulk, Marvel Studios reacquired the rights to the character. Leterrier, who had expressed interest in directing Iron Man, was brought onboard and Penn began work on a script that would be much closer to the comics and the 1978 television series of the same name. In April 2007, Norton was hired to portray Banner and to rewrite Penn's screenplay in order to distance itself from the 2003 film and establish its own identity as a reboot, although he would go uncredited for his writing. Filming mostly took place in Toronto, Ontario, from July to November 2007.

Over 700 visual effects shots were created in post-production using a combination of motion capture and computer-generated imagery to complete the film. The Incredible Hulk premiered at the Gibson Amphitheatre in Universal City, California, on June 8, 2008, and was released in the United States on June 13, 2008 by Universal Pictures. It is the lowest-grossing film of the MCU. Norton was set to reprise the role of Banner in the 2012 film The Avengers and other MCU installments featuring the character, but he was ultimately replaced by Mark Ruffalo, who has portrayed the character since then in the MCU.

The item "The Incredible Hulk movie 2008 prop ID badge Edward Norton Marvel Studios Disney" is in sale since Monday, September 2, 2019. This item is in the category "Entertainment Memorabilia\Movie Memorabilia\Props\Originals".