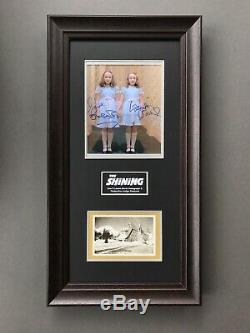 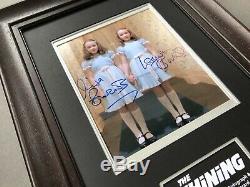 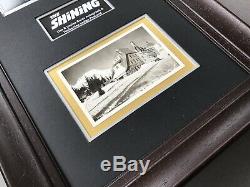 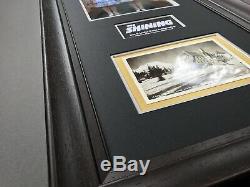 This striking framed display includes a signed photographic still & an original Timberline Lodge Postcard relating to the psychological Horror Film directed by Stanley Kubrick. The 8x5 still depicts the eerily memorable Grady Twins & has been hand-signed by Lisa & Louise Burns who played the twins in the Film.

The Postcard is circa 1940 & includes a black & white photograph of the Timberline Lodge in Oregon, United States, which was used to depict the fictional Overlook Hotel for some of the exterior shots in the Film. Postcards identical to this would have been used by the Production for referencing purposes & exist in the Private Archives at University of the Arts, London. The two pieces are beautifully mounted inside a custom display, measuring 33x62cm, with a descriptive plaque. The still was signed on Saturday 3rd June 2017 at the Collectormania event, NEC Birmingham, where Lisa & Louise conducted a rare public signing.

The item "THE SHINING FRAMED SIGNED CUSTOM DISPLAY with Provenance Horror" is in sale since Monday, May 11, 2020. This item is in the category "DVDs, Films & TV\Film Memorabilia\Props\Original".

The seller is "ronalsimpso_2" and is located in York. This item can be shipped worldwide.